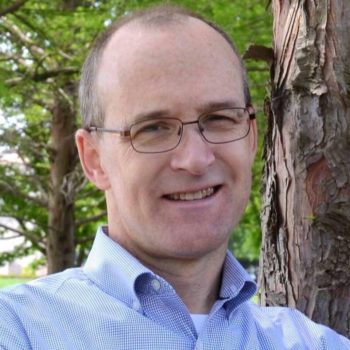 Everyone at Centric spends much of their time helping organizations learn to communicate, collaborate and build effective teams — just like military organizations do.

So when two Centric team members — who also served in the military — saw the chance to stand up Microsoft 365 for a nonprofit that provides mentoring and career development support to veterans, they jumped at it.

One of them was Mike Rogers, a member of our Columbus operating group and founder of the nonprofit, The Overwatch Partnership. He served in the Ohio Air National Guard for 16 years, most recently in the 178th Security Forces Squadron. Earlier in his career, he served with the 160th Aerial Refueling Group.

First Image: Outside Baghdad International Airport walking back from a memorial for an Explosive Ordnance Disposal Bomb Technician. Second Image: I was 18 years old, sitting in the middle of the desert as part of Desert Shield, which then turned into Desert Storm when we officially kicked off combat operations on January 17, 1991. Third Image: All decked out in my dress blues and getting ready to speak at my daughter’s school for Veterans Day.

“The Overwatch Partnership supports the transition to civilian employment for veterans by providing a network of mentors and human resource professionals to enable an improved career transition,” Rogers explained.

Another Centric vet, Mike McNett, did the “heavy lifting” on the IT side throughout the pro bono project. He retired from the U.S. Army’s Signal Corps in 2012 after nearly 30 years of service.

McNett said that because of Centric’s work, The Overwatch Partnership can now use modern collaboration tools to work better together, allowing the organization to continue helping veterans transition from active service to civilian life.

First Image: At 18 years old, one year after high school, attending Army ROTC Advanced Camp prior to being commissioned as a Second Lieutenant in 1985. Second Image: This was from Desert Storm as I was assigned as the Communications Operations Officer within “Task Force Freedom,” responsible for providing all military communications between military coalition forces in Kuwait City and the rest of the theater. Third Image: My wife and I at my 29-year military retirement ceremony – everyone in a military family makes sacrifices, and my wife Debbie and daughter Kelsie (now serving as a Captain in the U.S. Army Reserves) have been by my side throughout this adventure!

“Social networks of veterans and non-veterans alike are critical to the organization’s ability to build networks of mentors and human resources professionals that enable an improved career transition and hiring for our veterans,” he added. “Microsoft Teams and Microsoft 365 enables those networks.”

McNett also worked with Centric Technology Supervisor Sandeep Brar and other members of our IT team to donate used laptops to another veterans’ nonprofit, VCAS, in the Delaware, Ohio, area. In addition, he currently serves in various leadership positions at the Columbus chapter of Team Red, White and Blue and was Executive Director of the Columbus chapter of Bunker Labs. Like The Overwatch Partnership, they help veterans transition from military to civilian life.

“We greatly appreciate having so much great support from Centric for veterans!” McNett said. “We are honored to deliver unmatched experiences for those who have served our country and the organizations that support them.”

In honor of our employees who have served in the United States Military, Centric also made a donation to the Wounded Warrior Project.

In Carolina Beach, Centric Together Delivers a Model of Community Building

Stories from the Couch: Living Life By Our Core Values

We can work together to uncover answers so you’re more knowledgeable, confident and own a lasting solution that goes where you want to grow.