In a spin-off of the Essential Skills series, we highlight key skills for consultants, which are shown and missed in movies.

Have you ever wondered how they pick the careers of movie characters?

It seems like there are so many real estate brokers, architects, reporters, writers, professors, librarians, and restaurateurs in movies. There aren’t as many people in middle management in the finance department, to use one example.

Management consultants, I believe, are particularly poorly represented in a film – except when the film is about consulting. Let’s review: 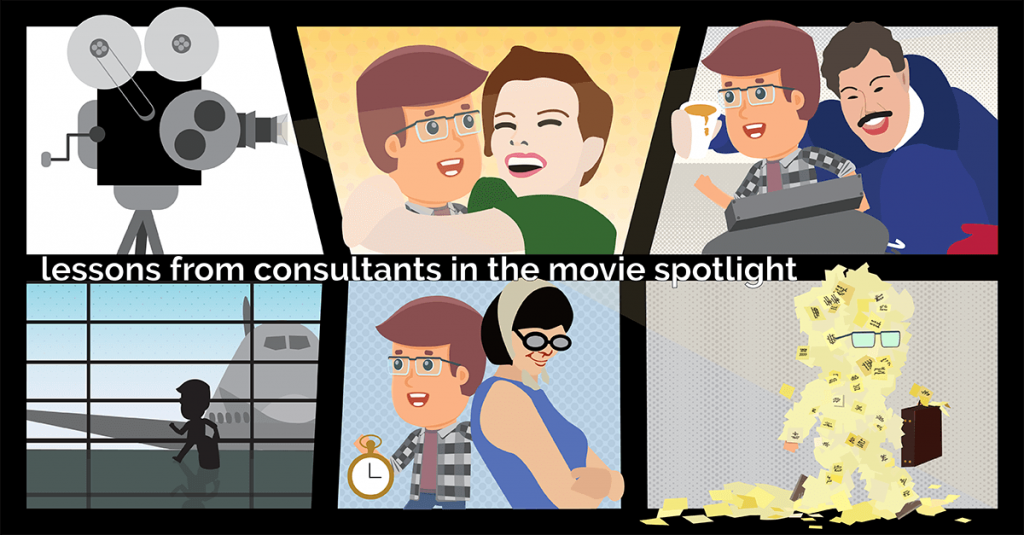 Consultants in the Movies

There are some fine portrayals of consultants in movies, even if not all of what you see is always entirely accurate.

Here are a few you might want to add to your Netflix queue:

Spencer Tracy plays a consultant working with a television network to install a new knowledge management system. Katharine Hepburn plays the subject matter expert afraid that her entire department will lose its job because of the implementation.

While data conversion is convincingly portrayed, it seems that system testing was not sufficiently suitable material for the silver screen, and the system accidentally fires everybody in the network.

Less about consulting and more about what it’s like to be a road warrior, this film stars Steve Martin and John Candy as executives trying to get home to Chicago before Thanksgiving.

This film captures an essential part of the business travel experience: That time when you’re stuck somewhere, and you really want someone to feel sorry for you, but there’s just nobody around who does.

George Clooney plays a consultant who specializes in handling corporate layoffs. He fills in his time with motivational speaking, extolling the virtues of a lifestyle unfettered by personal relationships or such complicating factors as a “home.”

#4 – “The Efficiency Expert” (1992; movie was called “Spotswood” in Australia on original release) –

Anthony Hopkins is the consultant sent to advise a hapless moccasin manufacturer on how to rescue a strategically dead business. Russell Crowe is a young up-and-comer who wants to become a consultant.

Hopkins learns that corporate culture can mean more than profit-and-loss and shareholder value. A touching scene includes his emergency participation in his client’s slot-car racing team, and how the tiny trophy he won from that means more to him than any other recognition he’s received.

Now, a film with a cult following of people who see their own work environment so accurately portrayed, this story centers around Ron Livingston’s character and his decision to become a terrible employee in revenge against his employer.

Consultants are unfortunately cast as the villains of the movie, as they convey the standard 1990’s threat of down-sizing.

Other than that, the film provides excellent examples of the need to improve leadership and company culture, hopefully before someone sets a fire which guts the entire office building.

Do the Movies Get the Essential Skills Right?

If there was a message to be drawn from this, I would look to the themes of these movies and how consulting is characterized in each of them.

How are the consultants portrayed? What mistakes do they make when it comes to some of their essential skills? My thoughts:

Spencer Tracy probably portrays the best model of consulting behavior: He is confident about his work and the benefits it will bring to the client. But he also acknowledges a problem and immediately (and calmly) gets to resolving it.

However, he does exploit a system malfunction to further his relationship with Katharine Hepburn, which is not behavior we’d advocate … but then again, it was only a movie!