Doubling Down on a New Language

Being involved in tech is to deal with a constant barrage of “the next big thing”, fads and trends and no shortage of missed opportunities where we all could have been billionaires several times over if we’d just picked that other direction.

Part of the tech exercise is to be aware of your surroundings, while only focusing a few things so that you can become skilled enough to get paid for doing something you hopefully enjoy.

Over the years, I’ve been paid to write programs in many languages: dBASE, C, Pascal, RPG/400, Clarion, Perl, Awk, Expect, shell script, Objective-C, VB, SQL, PickBasic, PHP, Python, Javascript and several more.  Some were cool, some were painful. All of which still have an impact (I still follow some RPG naming techniques when writing replicative code).

Over the years, I’ve “picked” several languages – irrespective of a $$ demand for them:

1. Turbo Prolog (late ’80s) – The successor to Turbo Pascal.  I was going to write an expert system that did formula analysis at a chemical plant. Yeah, I was 22. Messed with it at my job but ended up sticking with dBASE and C. Prolog is making a comeback though. We will see. Nevertheless, did not double down on it, which was a good thing.

2. Delphi (early ’90s) – A souped-up version of Pascal. My first OO language. Still probably one of the more elegant syntactically languages I’ve used. Some of our clients still use it. It’s actually a cross-platform mobile generator now. Did not double down on it, a good thing. Though don’t dis it. It’s not ColdFusion or PowerBuilder.

3. Java (mid ’90s) – This was going to be the future I thought, but I was having a tough time convincing my employer that the Internet was not a fad so I languished around 1.0 and 1.1 for a while. By the time 1.2 was out, I was off doing other things in an effort to be more rounded and Java exploded into a million directions and there was no catching up. Did not double down, arguably a good thing, or bad, depending on your perspective.

4. Ruby (early 00s) – This one hurts. Saw it. Played with it. Loved it. No one ever gets mad for having to learn Ruby. But you know what I thought would be better for me to focus on? Agile. Yep. I picked Agile over Ruby. Ground floor opportunity. I may not be rich now had I not, but I would at least be a guru like Shawn Wallace.  Did not double down. Bad thing. I still use it a fair amount, but it’s not a future service offering foundation.

But now, it’s time to double down…

Now based on that history, and the fact that I once bought AMZN at $17, watched it drop to $5, then sold it all when it hit $17 again (it’s at $343 today) – what I’m about to say with regards to my stated direction should not be construed as an enticement to follow suit.  Nor does it necessarily reflect the views of Centric Consulting, LLC.

Keep in mind my motto: 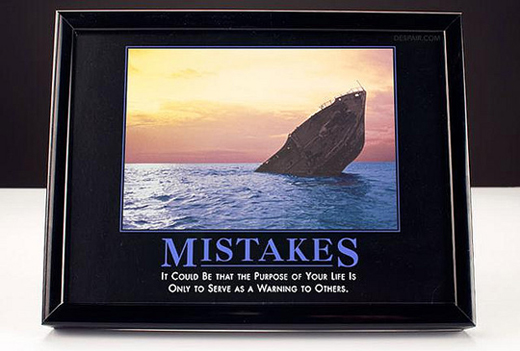 “Mistakes: It Could Be That The Purpose of Your Life is Only to Serve as a Warning to Others” Demotivator® by despair.com @despairinc

…so that being said.

5.  Go (2013, https://golang.org) – I’ve been watching this language, as well as several others, since 2009.  I wanted something that dealt with concurrency and horizontal scaling. A lot of them are cool – like Erlang and Haskell. But I wasn’t ready to go the functional route yet. A couple of others are more general purpose while still being multi-core aware like Julia and Rust, but they’re too new (2012) to double down on. But Go (a Google language) gets a lot of press (if you read what I read) and has been making huge inroads as a system language. Its promise of achieving the simplicity of Ruby and the speed of C is actually not far from the mark. I’ve been using it regularly since December and continue to enjoy it. Time will tell if it catches on, but I’m going to continue learning it like it will.The beauty of doubling down on it though is that if it doesn’t become the next Java/C#, it’s still a valuable skill to have and it only costs me time. And if there’s one thing I’ve found is that something you took the time to learn, *always* comes in handy at some point. Even if it’s just a Jeopardy question or pulling 1066/Battle of Hastings out of your rear in a London bar with a bunch of Brits who think that because you’re an American you don’t know anything that happened before TV was invented. (You should’ve seen the look on their faces.)

So regardless of where it goes, it’s time well spent. And even if it does hit big and I end up going on tour supporting all the books I write about it to help feed the dedicated service offering we create to cash in – there will be another language to learn after that, maybe a specialized language for self-driving car operating systems.