Ted has worked in a variety of roles for top-tier companies, including IBM, Accenture and Sapient. After starting his career on the technical side, Ted developed into a project manager and then into a director of program management, overseeing large consulting engagements. Prior to joining Centric, Ted was the office owner for Sapient’s Chicago office while it was going through a period of rapid growth.

Ted’s consulting experience spans several industries, including banking, insurance and travel. He has managed engagements of various types, from strategy, user experience and web design to large-systems integration projects including the standing up of a pan-European travel agency while he was living in London.

Ted has been married for 25 years and has three adult children. While they were growing up, Ted was an active father and coach to numerous sports teams (mostly baseball and soccer). Ted is an active golfer and softball player and he can still be seen on the tennis court occasionally.

Ted is also active in Young Life, an international youth ministry for high school students. After serving for years on the board of Naperville Young Life, Ted became more personally engaged as a volunteer leader for Young Life Access. Young Life Access is geared toward kids with special disabilities and it makes a tremendous positive impact not only on the kids, but on their entire families and leaders. 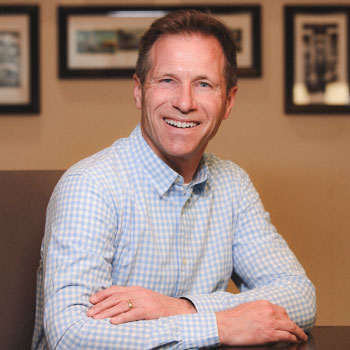 Let's Talk
"Centric feels like a group of friends who just happen to be doing business together. That same feeling extends to our clients - the best client engagements are those where you can't distinguish between who is Centric and who is the client."