Volunteers gather for weekend-long event to develop software applications for 12 charities – a donation valued at more than $177,000

Centric’s Parag Joshi, Brian Starr and John Quinn recently participated in Southwest Ohio GiveCamp, a weekend-long event that brings together a community of volunteers to donate their time and talents to provide web and software solutions for local nonprofit organizations. More than 75 volunteers, including software developers, graphic designers and database professionals, developed software applications for 12 charities. Collectively, the group donated more than 1,700 hours of labor worth approx. $177,000, or $14,000 per charity. The event took place at Miami University’s voice of American Learning Center, beginning on a Friday and continuing until late Sunday afternoon. Teams worked around the clock to get projects completed in time for the closing ceremonies on Sunday afternoon. In the end, 12 applications were developed, ranging from updated websites to a mobile tree classification database. The nonprofit organizations that received the work came from all over Southwest Ohio and included Franciscans for the Poor, Dayton-Montgomery County Ombudsman Office, Dakota Center, Inc., The HealthCare Connection, Camp Joy, Night for the Flight, Dar a Luz Network, Inc., British Transportation Museum, Building Bridges, Inc., Wright “B” Flyer, Inc., Price Hill Will and the Family Nurturing Center.

Parag’s Project Parag Joshi’s team created an app called IdentiTree Starter Kit, which can be used to identify 30 different trees. The app was developed for Camp Joy, which many children and adults in the region attend. The seven-person team created both iOS and Android versions of the app. 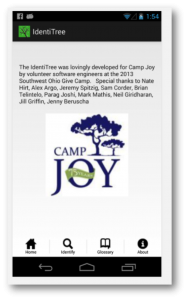 Work on this project started at 5 p.m. on Friday and the team worked virtually round-the-clock until Sunday afternoon. Parag and two other volunteers worked on the Android version. After initial hurdles with GitHub, Eclipse, deleting and recreating projects, the team finished and successfully demonstrated the app at 3 p.m. on Sunday. The app was released to Google Play two days later. According to Parag, Camp Joy’s Director was very happy with the final results!

About Southwest Ohio GiveCamp GiveCamp is a weekend-long event that brings together a community of volunteers who donate their time and talents to provide web and software solutions for local non-profit organizations Since its beginnings in 2007, the GiveCamp program has spread to many communities throughout the United States, including Ann Arbor, Grand Rapids, Lansing and Southwest Ohio. The Southwest Ohio GiveCamp program has provided benefits to several dozen local charities, worth thousands of dollars in software services. The yearly event is organized by volunteers from local technology communities.  For more information, contact Eric Schwartz, Nonprofit Coordinator, at 937.643.9720 or via email at eric@southwestohiogivecamp.org. Below are a few photos from the event. Check out Centric’s Facebook page to see more.