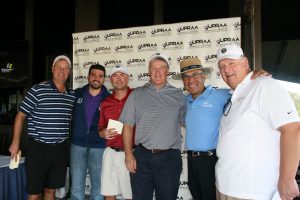 The Association of University of Puerto Rico Alumni and Friends Abroad (UPRAA), in conjunction with The Courses at Andrews Air Force Base, hosted Wounded Warriors in the Charity Golf Classic on Friday, Sept. 26th. Centric’s John Otroba (pictured at far right), a manager with Centric’s Energy and Utilities National Practice, participated in this event and was on the winning team along with Jacob Lozada from URPAA, Bruce Vaughn and Dan Lash from VLP Financial Advisors, and Christopher Healy from CapGemini Consulting.

Wounded Warriors from Fort Belvoir Army Transition Unit and Walter Reed National Military Medical Center in Bethesda came together at Andrews AFB to participate in the URPAA golf tournament. The warriors were paired with gracious sponsors from around the Washington DC Metro community who donated funds to cover costs to provide these heroes with a day outside of their typical daily routine. The event included a complimentary round of golf,  along with lunch and prizes. This was the third year UPRAA hosted the Wounded Warriors from the region.

The Charity Golf Classic was held by UPRAA as part of National Hispanic Heritage Month which is observed from Sept. 15th through Oct. 15th. Funds raised by the event go to the UPRAA Scholarship Fund which is awarded to Hispanic students who have demonstrated academic merit, commitment to public service, and financial need.

UPRAA is a non-profit organization created to establish a network of University of Puerto Rico Alumni and Friends in the continental United States and abroad. UPRAA develops and conducts programs and initiatives for its members, and supports the educational goals of Hispanic youth in Puerto Rico and in the Washington DC metropolitan area.