back to all News and Events
|
In the News

It’s not entirely correct to call Centric Consulting a company without walls, but it’s close. There is no headquarters, just home offices and kitchen tables where most of the company’s 700 employees and contractors work. And employees are likely to hold their next meeting at Starbucks, not in the corporate boardroom. 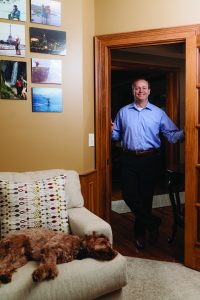 “The decision was more about achieving work/life balance than a financial one,” says President Larry English of the decision by him and his partners to forgo conventional office space. They made the resolution 15 years ago in the company’s early start-up stage.

“We wanted to create a consulting model in which we kept the good stuff from where we’d worked previously and threw out the bad,” he says.

The partners, who met at a multinational consulting firm, even chose a name for their business consulting and technology solutions firm that reflected their desire to center everything they did around the needs of customers and employees. Staff members have children and conflicting commitments, so the partners let them manage their own time. The firm cares about results — not work schedules or locations.

“They’re incredible people,” English says of his employees. “They’re able to balance getting their kids off to school, and whatever else they need to do, with getting their jobs done.”

The tools for the business model are constantly improving, and to do their jobs, employees don’t need much more than a laptop, a smartphone and a flat surface, whether that surface is a desk in a spare bedroom or a table at a coffeehouse. With those tools in hand, the firm maintains a consultative focus on insurance, financial services, utilities, health care, manufacturing and retail. Its consultants are often embedded for long periods at client work sites, so a bricks-and-mortar location would sit empty.

That virtual workplace extends to Centric’s leadership, as well.

“I’m sitting in my den right now with my dog curled up next to me,” says English. That den is in Columbus. Partner Dave Rosevelt, the firm’s CEO, works from his home in Ann Arbor, Michigan, while COO Eric Van Luven calls St. Louis home.

Centric isn’t entirely without walls. A small office in Dayton serves as a mail drop and storage site. And Centric leases temporary space as necessary to handle projects that need secure locations, hold meetings or train and orient new employees. But for the most part, home is where the work is.

Much of the company’s workforce is spread across local teams, supporting clients in 12 U.S. cities. Leaders set their sights on cities where they feel they can make an impact, then recruit local leadership and build a client base and local work team. Consultants living and working in the same city as their clients can be more responsive, and there is little travel time, reducing travel burnout and costs.

Operations manager Mara Belcher, who has worked from her Columbus basement office for the past nine years, fully buys into the Centric model.

“There are always challenges, but I wouldn’t trade it for anything,” she says.

The Centric model welcomes community, and staffers don’t dread the idea of meetings. Many staffers in Belcher’s local team of about 50 meet Tuesdays for strategizing, and there is a group business unit meeting every other month for business talk. In between, emails and conference calls keep people in constant contact.

Despite the inherent challenges in its model, Centric Consulting regularly wins accolades for the way it does business. Among the latest recognition is a Glassdoor Employee Choice award for “Best Places to Work 2016.” That’s especially meaningful to English because the award is based on employee perception.

English and his partners are cognizant of the need to help their people feel like part of a community, even if they’re flying solo for large chunks of time. In addition to collaborative local work teams, the entire team gets together three times a year. Two of the annual gatherings have a business emphasis, but the winter trip is different.

“The idea is to have fun, to celebrate the year,” English says. 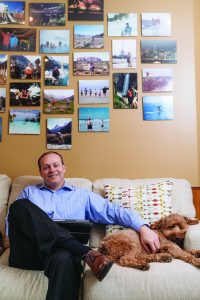 While the virtual-office business model wasn’t a financial decision, the lack of infrastructure does free up funds to finance fun. This year, all employees and their significant others gathered in Puerto Vallarta, Mexico. Previous destinations have included Las Vegas, Nashville and Puerto Rico.

Maintaining a rich culture in the face of dynamic growth is critical for English.

“It’s what I think about all the time,” he says. “We want to be in 25 U.S. cities by 2025. How do we grow that big that quickly and still maintain our company culture?”

To do that, English wants to cap the size of local teams at 100 to 125 employees. That way, no matter how large the company gets, everyone can feel like part of a more intimate working group, getting to know their co-workers and collaborating openly and effectively.

This article first appeared in the Columbus edition of MeritMatters, a magazine by FirstMerit Bank.

Below is an interview with Centric President, Larry English on the importance of culture: