A recent ABI event, co-sponsored by Centric Seattle and Concur, highlighted how individual confidence impacts success of teams and organizations.

“Inspiring Confidence” was the theme for the breakfast hosted by the Anita Borg Institute (ABI) on Tuesday, September 20th, in Seattle, WA. Centric Seattle co-sponsored the event with Concur, the world’s leading integrated travel and expense management company, owned by SAP.

The theme was brought to life through the message delivered by the keynote speaker and the individuals that showed confidence by sharing their stories. 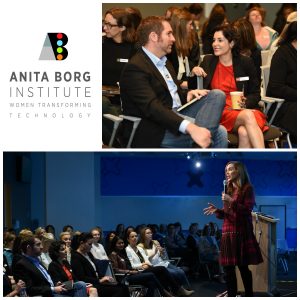 ABI is the largest global network of women in technology. Started 23 years ago, by a woman named Anita Borg, it has expanded to over 100,000 women technologists in 62 countries. Last year, the organization began launching local community chapters in key cities around the world. Seattle is one of them.

Centric’s Seattle office has been involved since day one. As a local leader in diversity and inclusion, the Seattle Business Unit takes pride in supporting women at all levels and roles within the organization. And within the community.

The September event showcased how confidence impacts individual success in teams and organizations.

Concur President Elena Donio kicked off the event with her story to success: Elena confidently invested everything she had into a start-up at the beginning of her career, which quickly paid off with a stock price that shot her investment through the roof. However, it was only a short time later that her world was turned upside down when she found herself completely broke, with a stock worth close to nothing.

Elena had two approaches she could take: Be completely defeated and give up, or learn from what happened and confidently move forward.

“Failure provides an opportunity to succeed,” said Elena, as she described how she decided to moved forward. Elena’s positive approach and hard work mindset paid off – and she is now the president of Concur.

ABI.Local is a global network of local communities that connects women technologists around the world. ABI.Local offers meetups, codeathons, workshops and conferences, and other valuable events for women in the technology industry.

Every October, ABI hosts the largest collective gathering of women technologies in Houston. Called the Grace Hopper Celebration, it brings together more than 15,000 women in STEM professions, to expand their networks, gain diverse perspectives, and navigate technical careers with hands-on events to help them learn and grow.