If you want to demonstrate an essential skill of leadership, define your role.

You had an interview. You were told what the circumstances were and maybe even what the expectations were. You might have been asked questions about what you did in a similar circumstance, but that was mostly to confirm your experience. It wasn’t to ask you what you would actually do.

For nearly every role below that of the top dog, it is almost never expected that someone will walk into a new role with a plan. The expectation is that the new person will fit in, taking on the plans, issues, and ideas of their predecessor.

Maybe you’ve been brought in because the person before you wasn’t working out. In all likelihood, that’s probably not specifically because their ideas weren’t any good. It was because they weren’t executing, weren’t meeting expectations. They weren’t delivering results.

You’re expected to do a better job, but not necessarily a different job. 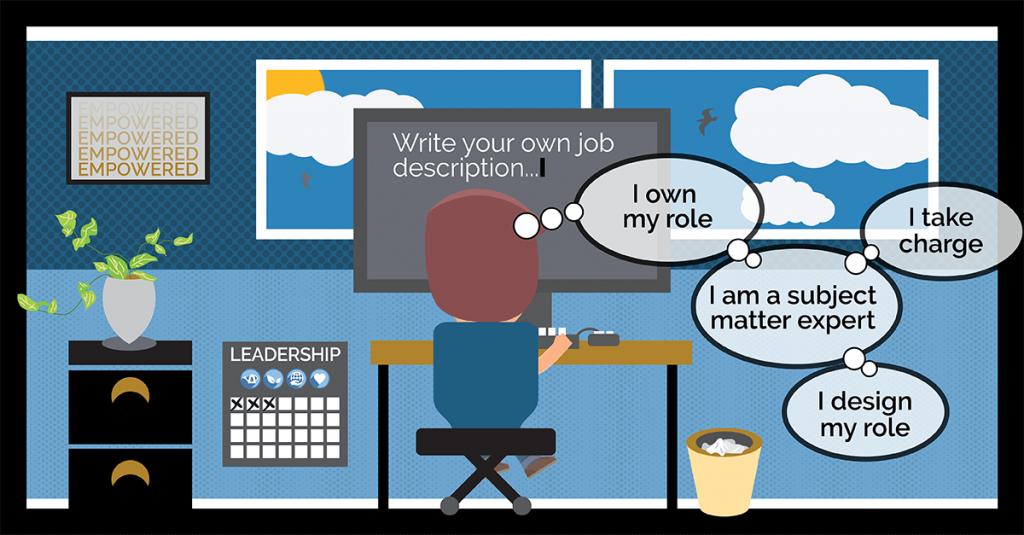 To torture a cliché, however, it’s probably that the issue was not doing the job right, but whether they were doing the right job. Defining the job is a first step to influencing the situation.

Making that jump is monumental. It’s a career milestone, a demonstration of subject matter expertise, and a hallmark of a project leader. It comes when you understand enough about the role, the environment, and expectations that you can define just what the job is that you should be doing.

It’s what makes you different from your predecessor and begins your delivery of successful outcomes.

Your stakeholder – your manager, your client, your customer – probably doesn’t know everything that your job entails. Maybe they had a written job description for it. At the very least, they had experience with your predecessor, so they have an idea what the issues are.

The fact is, however, that they don’t know everything you’ll have to do, or understand the priorities of the items on the job description. They may understand that you have to get a certain report in every week, but they may not realize what other processes that report enables. Maybe they don’t realize that the report is actually a legal requirement, so you can’t just skip a week if time runs short.

They need you to tell them what your job is.

It’s also possible that your boss or client used to do the role that you’re going to do. Maybe you’ve been brought in to replace them on their promotion. They’ve probably got a lot of their own immediate experience to share with you. “Item A determines your success.” “Getting along with Person B is critical.” And so on and so forth.

You’ll have to listen to them, absorb their experience, and fold it into your own plans. Then you come back with your own description of the role.

Their experience probably included things that don’t need to be part of the job. For one thing, anybody’s role usually has two parts: the items that logically fit the role, and then all the other random stuff that the person filling the role has collected over the years. They’re still doing it because nobody could be found to pick it up.

It doesn’t mean those tasks really belong to that role, and by the time you come along, it could be high time a new owner was found for it.

Once you’ve established that you’re a good listener and appreciate the hardships your predecessor faced, your boss should appreciate your clarity in restating the role.

What’s critical, what’s strategic, and what’s going to have to get deferred until you hire someone else?

So, what does it mean to design your own role?

First, it means having independent expectations of your resources, not just accepting what you’re handed. Your design should not just state a bunch of (unrelated) tasks and duties. It should connect them or justify why an outlier is included. It should also include the resources needed. That could be the skills and number of team members, or it could be facilities, technology, or access.

Second, it means defining the objective of the role. This doesn’t mean you should be building a box around yourself. It means setting the strategic objective. What does success look like? What are the components which support it? How do you support those around you, and how does your work support the success of the whole?

Why Define Your Role?

Several reasons. First, you’ll know better than anyone what the role should look like. You’re living it, day after day. You’re seeing what works, what doesn’t, and what’s a waste of time.

Next, it’s empowering. It’s taking ownership. It’s easier to own the goals if you set them yourself.

It’s also a positive contribution. It’s not a passive acceptance of the way the world works. It’s a take-charge approach to making a contribution.

Now, you may not always get the positive response you want from this.

Certainly, if you got hired to wash dishes, your boss is going to want you to wash dishes. He doesn’t want you spending your time doing a time-motion study on dishwashing, or conducting evaluations on dish soap quality.

In the project leadership world, however, defining your role is demonstrating that leadership. It’s part of the personal brand you’re trying to maintain.

You may have to negotiate on the role, or phase in (or out) certain elements. You may even change the description over time. No matter what, though, you should own the vision of your role.