A colleague read my recent article about imperfection and suggested I write about how to tell when your work is “good enough.”

When it comes to your work, nobody else can tell you when you’re done.

Like a lot of things, our approach to “good enough” is ingrained in our culture. We admire – and celebrate – the tireless professional who accepts nothing less than perfection. People like Steve Jobs, Bill Gates, and Michael Jordan, just to name a few.

It’s not culturally fashionable to admit that we’re settling for something less than an A+ product, no matter what we’re doing.

However, you’ll quickly drive yourself nuts if you put a fanatical commitment to excellence into every task you take on.

Imagine not eating your toast in the morning until it met your exact definition of toasted. You could go through a loaf of bread in morning (not to mention taking an hour to do it) and you might still be hungry. Sometimes you have to accept “good enough.” 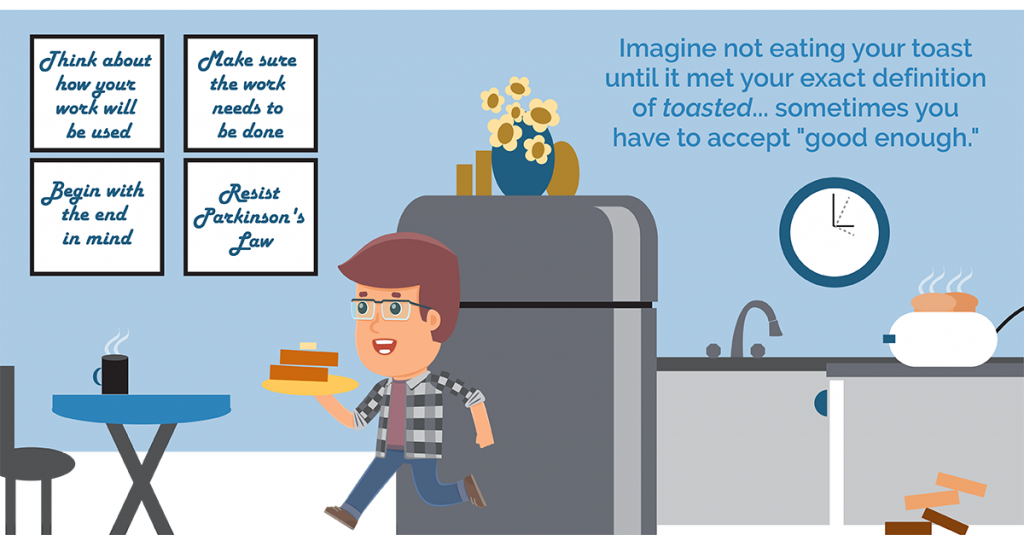 What is Good Enough?

You could just reach a certain point in a task or deliverable and say, “good enough,” pack up and go home. That sounds a lot like giving up or cutting corners. So, how do you give it a “good enough” level of effort, while still delivering a decent outcome?

The solution to this is knowing from the start what you’re trying to do, so you can put in a proportionate level of effort. That way “good enough” won’t be missing anything that’s really needed. In other words, if you were being rated on a “pass/fail” system, you would make sure you’re on the “pass” side.

Here is a series of steps to deliver results with “good enough” efforts:

Step 1: Think about how your work will be used

This is not just a functional answer (i.e., a design specification will be used by a developer to produce a program module). It’s about how someone will actually handle your work. So, if you put X effort into the work, you will save someone Y amount.

For example, let’s say you’re running a weekly status meeting and need an agenda. Ten minutes spent on an agenda will make the meeting more efficient and impactful, avoiding perhaps 30 minutes of wasted time (multiplied by, say, half a dozen people).

That 10 minutes is time well spent. Those five minutes picking the best font for your bullet points, and the 10 minutes looking for cute clip art … well, they’re just hurting your ROI.

There’s also the deliverable that will be the roadmap for three months of work or perhaps it’s a presentation to 500 people. That has a higher standard of thoroughness and quality. Still, remember that you can reach a point of diminishing returns where your extra hours of work may really not make it better.

Step 2: Make sure the work needs to be done.

If you’re looking for time savings, nothing saves time like not doing anything, right? Well, most of us don’t get too many “optional” tasks, although they do come up from time to time, so you’re unlikely to get an easy out here.

Managing developers, I often saw them struggling to solve a problem they’d arrived at. They’d gotten there in an entirely logical way: the specification said, “Do X.” For the sake of being thorough, they assumed that Y and Z both needed to be done for X to be satisfactory.

Now they were stuck on solving Z, even though nobody had actually asked for it. That’s when I would step in, leading them to a simpler answer that didn’t involve dozens of hours spent on solving a very difficult problem that didn’t actually need to be solved.

Checking in with somebody else can be valuable. They can ask, “Why are you doing that?” In turn, saving you a lot of time.

Step 3: Begin with the end in mind

Thank you for those wise words, Stephen Covey. What will the end product look like? What has to be in it to meet the minimum criteria for completion? If you can focus on the essentials, you can make sure your “good enough” really is “good”.

Here’s another, perhaps more surprising, way to define good enough: How much time should you invest in what you’re doing? (Hint: if the answer is “as long as it takes” you’re going to run into problems!)

Personal time management is built on knowing yourself well enough to be able to estimate how much time it will take you to get something done. If something is taking a lot longer than you expected, ask yourself why. Were your original estimates incorrect, or are you focusing on the wrong things?

Also, nothing focuses attention on what’s important like a deadline!

Don’t just begin with the end in mind. End with it, too! It may seem obvious, but when you get to the end, remember to stop!

If you’re a real perfectionist, however, this is where the danger lies. You have to fight your natural tendency to make everything just a little bit better.

Think of the comparison between Google’s “beta” applications (e.g., Google Docs) and their Microsoft Office equivalents. Microsoft loads up their applications with incredible numbers of features, handling every possible use case that somebody could come up with.

Google, on the other hand, only did the easy stuff. Their applications don’t do everything you want, but they do what everyone needs most of the time. Google produced the “good enough” tools. (They also give them away, which is worth remembering!)

You have to watch out here, though: Parkinson’s Law might be better framed as “work will fit the time allowed,” with the corollary, “if you wait until the last minute, it will get done in a minute.” And you can just imagine the quality of thought that will go into that.

In the end, the objective of “good enough” is to get to the end more deliberately and efficiently, not to determine when to cut and run.

As long as you can make sure the investment is proportional to what you want to get out of it, “good enough” should still be pretty good.