Learn when is the right time to accept and how to say “yes.”

There’s a posting making the rounds on social media about the habits of ultra-productive or efficient people that make them successful. Like most of these things, it’s packaged in easy-to-digest bullet points. The one that really gets me is: “They say no.”

What It Means To Say “No”

However, in the context of these bullet points, when I see that, I see someone saying “no” because all that matters to them is their own time, their own reputation, and their own accomplishments. I see someone who isn’t a team player.

Now, it’s an attribute of this sort of bullet point list that there’s little nuance or context to these behaviors. Obviously, if someone’s honoring a previous commitment, they must have said “yes” at least once.

But this article neatly ignores something I take as a given: In a professional setting, your time is not 100% your own, and neither are your tasks, objectives, or success. In a situation like that, when you walk around saying “no,” you’re saying, “you’re on your own, suckers.”

A bullet list also avoids the reasons you might say “no.” Because it focuses on preserving one’s personal productivity, it elevates an aggressive state of denial to a place of admiration. It fails to consider what it is you’re saying “yes” or “no” to: There are some requests to which you should say “no,” while there are others you should say “yes” to.

Choosing When To Say “Yes”

But saying “yes” doesn’t mean you’ve given someone a blank check to consume your time and attention. You still have control over that, and you still have responsibility for it. 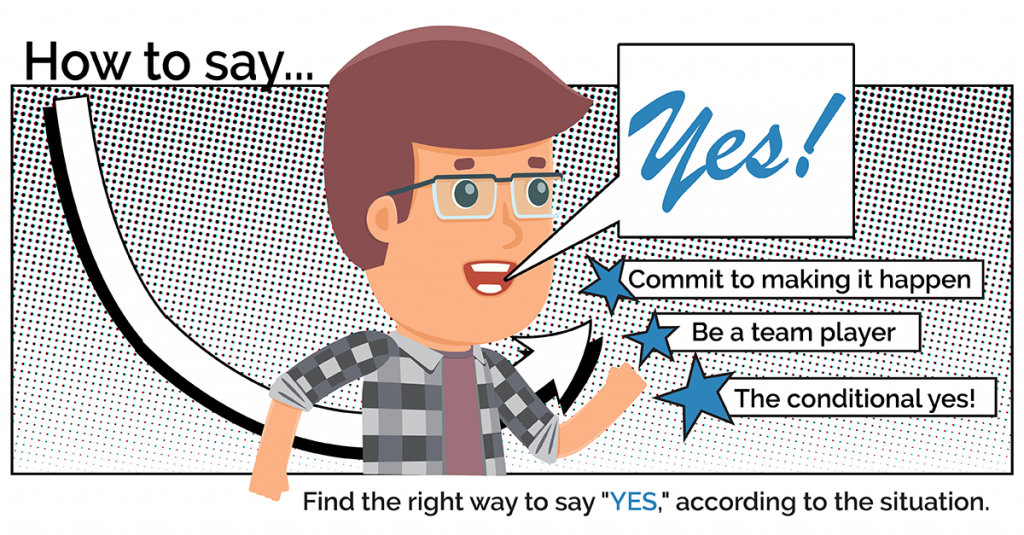 So how do you say “yes,” keep that control, and not become the ostracized jerk in your office?

You find the right way to say “yes,” according to the situation:

We’ll get to the problem of being a people-pleaser who says “yes” all the time, but the point is, saying “no” to protect yourself is a recipe for containing yourself in a box, and that imaginary box will be all too visible to the people around you. Next week, we’ll talk about “How to Say No.”