Centric Must Reads: 13 Centric-Certified Books to Inspire Your Personal and Professional Life (Book #6)

Reading is an important part of Centric’s culture – we’ve found that learning from the experiences of others is one of the best ways to be inspired. Good books and insightful lessons are shared frequently within the Centric walls – whether that be through team emails, via Twitter or in personal conversations. So, we thought we’d take a moment and bottle up some of the great reads that have impacted our own lives and thought processes. Below are 13 books recommended from Centric’s leaders. Take a look and enjoy! And let us know if you have comments on these books or others to recommend. We’d love to hear from you.

Book #6: Read “Never Eat Alone” and use the power of networking to build lasting relationships 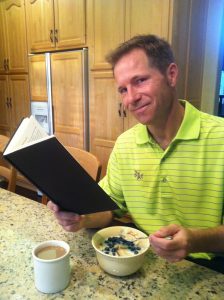 A few years ago, I told a friend of mine that I was reading an interesting book on networking called “Never Eat Alone: And Other Secrets to Success, One Relationship at a Time” by Keith Ferrazzi, who had started his career in Chicago with Deloitte Consulting. My friend responded, “I knew that guy. We were consultants together at Deloitte. He would always wear a bow tie (before they were popular) and hang around the partners’ offices at lunchtime.”

In fact, the author tells this very story in the book (although he doesn’t mention my friend!). He says that, “had you known me back then, you wouldn’t have liked me.” The author further explains that networking, at the time, was all about what he could get. It was all about personal gain for himself. Being noticed (with the bow tie) and face time with the partners was his goal.

However, the author then tells about his personal transformation, as he shifted his focus from what he could get to what he could give. He talks about helping others and the value and power associated with connecting his network with the networks of others. By focusing on what he can give, he not only feels the satisfaction of helping others, but others are there for him when he is in a place of need.

Much has been written recently about the power of “positive networking,” but “Never Eat Alone” by Keith Ferrazzi (first published nearly 10 years ago) is still very valid today. I have passed it onto my kids as they start their careers and recommend it for anyone interested in expanding their network in a positive way.

By focusing on what he can give, he not only feels the satisfaction of helping others, but others are there for him when he is in a place of need.

Find the complete list of the 13 Centric must reads here.